The Gold Coin is Bedtime story for kids

In the city of Delhi, lived two merchants. They had a flourishing business of ‘ghee’. Their shops were quite close to each other.

One day, one of the merchants wanted to borrow five hundred gold coins. He took the money from the other merchant. But afterward, he refused to pay back the amount. The second merchant went to the Emperor and demanded justice. The Emperor handed over this responsibility to Birbal. Birbal asked each of them to give his statement. The plaintiff said, “This merchant had borrowed five hundred gold coins from me and now, he is refusing to pay back.”

The merchant who was the accused said, “No, sir. This is false. We both carry our business near one another. So, he is jealous of me and has put false blame upon me.”

Birbal was confused on hearing this. He asked them to come after ten days for the decision.

After some days, Birbal ordered ten containers filled with ten seers of ghee each. Only in two of the containers, he placed a gold coin. Afterward, he called all the ghee merchants of the city. The two merchants also came. He gave each of them a ten seer tin of ghee and said, “Each of these tins contains ten seers of ghee. Take it home and after a careful examination, decide its price.”

He purposefully gave the containers with the coins to the plaintiff and the accused. Each of the merchants took his tin home and put the ghee to different tests, decided its market price. The two merchants found a gold coin in their respective tins. The merchant who had appealed to the court was honest. He at once came to Birbal and returned back the gold coin. But the other merchant was cunning. He took out the gold coin and gave it to his son.

On the fixed day, all the merchants came with their tins of ghee. Birbal carefully examined the accused merchant’s tin. He found that the amount of ghee had decreased. When he asked about it, the merchant said, “Maharaj, it must have been reduced while heating.

“Is it so? Then I will also check by taking another ghee tin. ”Birbal replied.

Saying so, he went inside and asked his servant, “Look, go at once to the house of the accused and ask his son to come to the court with the gold coin, that his father had found in the tin of ghee

Soon, the merchant’s son entered the court with the gold coin. At once, Birbal asked him, “Did you bring all the five gold coins that were in this ghee tin?”.

“There was only one gold coin in the tin and not five. See, this is the only coin.” The son replied with astonishment.

Listening to the son’s statement, Birbal turned towards The merchant and said, “You cheated me for a single coin. Then for five hundred coins, how can you be honest enough? Now, what do you have to say?”

The merchant had no other alternative besides accepting his guilt. He knelt down before Birbal, begged to be forgiven, and returned back the coins to the plaintiff.

Read Next Story The Verbal Reward 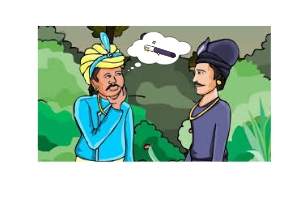 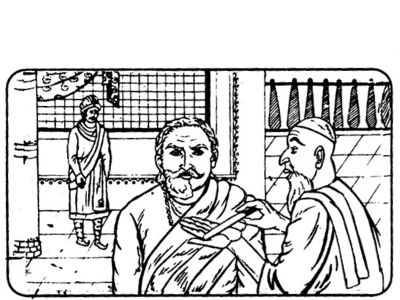 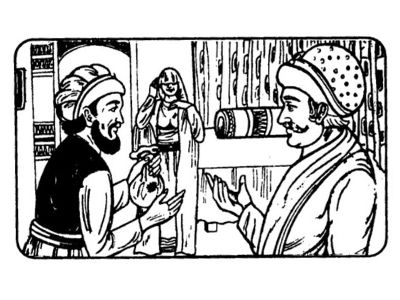