There was once an emperor who loved new clothes above everything else. Designers, tailors, clothmakers, dyers, and specialists in all sorts of needlework traveled to his city from all over the world. Anyone who could suggest flashy, fancy, new outfits for the emperor was always very welcome at the palace.

One day, two weavers came to the emperor’s dressing room. The emperor, his butler, and all his Officers of the Royal Wardrobe gasped with amazement as they listened to them describe their work. “ We have created a special type of fabric that is so light and airy the wearer cannot feel it is there.” the first weaver announced.

“Our samples are top secret, which is why we have not been able to bring any to show you, ” the second weaver explained.

“However, we can assure you that not only are our designs and patterns exquisitely beautiful, ” said the first weaver. ” But the fabric has the unique advantage that it is completely invisible to anyone who is not worthy of his job or who is just plain stupid ” laughed the second weaver, and the emperor and all his courtiers gasped and chuckled along.

“We would be honored if you would like to order the very first suit of clothes made out of this extraordinary fabric, your imperial majesty, ” said the first weaver, bowing low.

The emperor capped his hands with delight ” I’d like to place an order right away ! ” he commanded, and he gave the two weavers a large sum of money so that they could buy the rare, expensive materials they needed and begin their work without delay.

The weavers set up their looms in the palace studio and got going right away. They started their work on the Emperor’s New Clothes. News of the strange cloth spread around the city like wildfire and soon everyone was talking about it. But the weavers worked behind closed doors and no one got even a glimpse of what they were doing. Still, day and night everyone heard the looms clicking and the shuttles flying, and work on the magical cloth seemed to be progressing well.

As the days went on the emperor began to feel rather uneasy about seeing the cloth for the first time Imagine if I can’t see the fabric me, he thought to himself. How dreadfully embarrassing that would be! The worried emperor decided to send his trusted, old butler to see how the weavers were getting on. He was sure that his butler was both fit for his job and very wise, and would be sure to see the wonderful material.

The weavers bowed low and ushered the butler into the studio But the butler couldn’t see anything at all. Heavens above the butler thought to himself. Those looms look totally bare ta me! I must either be a very bad burier, or else I’m an idiot. No one must ever find out … So he praised the material that he could not see, told the king that the weavers’ work was indeed magnificent, and everyone in the city heard that the cloth was truly unbelievable!

Soon afterward, the weavers sent word to the emperor that they needed more money to buy essential items for the work. The emperor was so happy with the butler’s report that he sent them twice as much money as before. The emperor was more excited than ever. ” I’m going to have the most amazing suit of clothes in the world ! ” he giggled to himself ten times a day.

The weavers announced that they finished their work on The Emperor’s New Clothes. They went to the dressing room to present the material to the emperor amid fanfares of trumpets.

“Is the cloth not beautiful beyond all imagining ?” the weavers sighed.

The emperor smiled a wide smile, trying to hide his horror. All that the weavers appeared to be holding up before him was thin air. The emperor’s worst fear had come true to him the cloth was invisible. I am not a fool or not worthy to be ruler, the despairing emperor thought. So he beamed and leaned forward and inspected the air. Wonderful! Splendid! Magnificent ! ” he cried, and his butler and all the Officers of the Royal Wardrobe nodded and cried out compliments. None of them could see anything either, but they weren’t about to risk losing their jobs by admitting it.

So the weavers got out their tape measures and their scissors and they set about cutting the thin air ( or so it seemed ) into a pattern All night long they sewed with needles which appeared to have no thread, and in the morning they announced that the emperor’s new clothes were ready. ” Now if your imperial majesty would care to disrobe, we will dress you in the amazing garments.”

The emperor swallowed hard and took off all his clothes. The weavers helped him on with the underpants and trousers and shirt and jacket that he couldn’t see. ” Aren’t they lighter than cobwebs ? ” they sighed. The emperor spluttered his agreement He couldn’t feel that he had any clothes on at all.

The emperor stood back and looked at himself in the mirror. According to what he saw, he didn’t have a stitch on! But he turned this way and that, pretending to admire himself. And the butler and all the Officers of the Royal Wardrobe cried out, ” How wonderfully the new clothes fit you sire ! ” and ” We have never seen the like of the amazing colors! The design is a work of genius ! ” – even though it looked to them as if the emperor was as naked as the day he was born.

Everyone else can see my new suit except me, the emperor thought to himself glumly. And he walked out of the palace to parade before the people in his marvelous new clothes.

Suddenly, a little boy’s shrill voice rose over the applause of the crowd. ” But the emperor has nothing on.” the child shouted. ” Nothing on at all! ” Suddenly, there was a stunned silence and the hundreds of pairs of eyes were staring at the little boy. Then someone sniggered … someone else tried to stifle a giggle …

Another person guffawed and snorted .. and the whole crowd burst out into uncontrollable peals of laughter. The emperor’s face turned as red as a ripe tomato. ” I am indeed a fool !” he murmured. “Two tricksters fooled me. ” He ran back to the palace as fast as his short, naked legs could carry him – but the clever ( and now very rich ) weavers were long gone!

Do not believe in things without proper evidence.

I hope you love The Emperor’s New Clothes. Really, this is a very interesting bedtime story for little kids. If your children want to read more stories then please check our Home Page. We write the best stories for your kids. Stories make your children’s night beautiful with full of Fun. 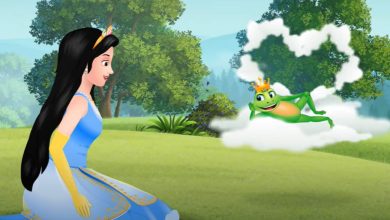