Space Adventure With Mickey is a very interesting and Enjoyable bedtime story for little-aged kids. This is a very cool and exciting story. This is a story about Mickey and their friend’s Adventure. Read More Full Story To know more How was going Mikey adventure.

Welcome to Adventure Day at the Mickey Mouse Clubhouse! Mickey and the gang have a treasure map from Professor Von Drake. They’re going to the moon, to Mars, to Saturn, and to a mystery planet- to find a treasure!

“Not so fast!” says the Professor. He explains that along the way, Mickey and the gang must find ten Treasure Stars. These stars will lead them to the mystery planet-and to the treasure!

Everyone is on board- even Toodles. They count down: Ten, nine, eight, seven, six, five, four, three, two, one…

The gang doesn’t know that someone is spying on them!

“That space It’s Space Pirate Pete! “Arrgh!” he says. treasure will be mine!”

Pete has a new helper named Quoodles. He asks her for a tool to stop Mickey’s ship. Quoodles has a milk carton.

“What good is a milk carton?” asks Pete. “Oh, I get it. All those milk cartons will block the rocket!”

“Look at all that milk,” says Goofy. “This must be the Milky Way!”

Space Pirate Pete says, “You’re surrounded by milk. Give up the treasure map!” “No way!” says Mickey. “We need a Mouseketool. Oh, Toodles!”

But Toodles doesn’t show up. Where is he?

Toodles sees Quoodles outside the ship. Toodles has never seen anyone else who looks like him! They smile at each other and make silly faces.

On the Moon, Mickey meets Moon-Man Chip and Moon-Man Dale. Mickey asks if they have seen any Treasure Stars.

“We see lots of space junk,” they say. “We put it all in our Moon Locker.” “Then take us to your locker!” says Space Captain Mickey.

Moon-Men Chip and Dale lead them to their locker. Goofy opens it.

“I think they need a bigger locker,” says Goofy. Hot dog! There are Treasure Stars one, two, and three!

The Treasure Stars fly to the spaceship and stick on like magic! “Now we’re ready to go to our next stop,” says Mickey. “Mars, here we come!”

Martian Mickey says, “They may be in the Star Tree Forest!”

Meanwhile, back at the ship, Toodles sees Quoodles again. He gives her some flowers.

But Pirate Pete stops by. “Quoodles,” he says, “stop your dillydallyin’. We gotta get that treasure map!” Quoodles has to go. Poor Toodles!

Martian Mickey takes the gang to the Star Tree Forest. “We don’t have many trees on Mars, so every tree is a forest,” he says. Stars four, five, and six are on the tree. They fly off and go straight to the rocket ship.

Space Pirate Pete has another trick up his sleeve. He pretends to be a little old lady who is lost in space. The little old lady asks Goofy for a map. “Goofy, nooooo!” says Donald. But it’s too late. Goofy gives Pete the treasure map!

Goofy sure goofed. They’ve got to get the map back! Mickey, Goofy, and Donald chase Pete around the rings of Saturn, but they can’t catch that tricky space pirate. Then Mickey falls off the rings and floats away into outer space, Oh, no!

Mickey bumps into space rocks until Pluto rescues him. “Thanks, Pluto,” says Mickey. Pluto and Mickey fly back to Saturn and the ship. On the way, they find the last Treasure Stars: seven, eight, nine, and ten!

Back on Saturn, Toodles brings d Mouseketool-a big birdcage – to trap Pete. Donald grabs the map! But then Quoodles brings one of her tools. It’s a Space Chicken to help Pete getaway!

Now Mickey and his crew have the map and all ten Treasure Stars. The stars light the way to the mystery planet. “Hey, that planet looks familiar,” says Goofy. “Let’s call it Planet Mickey!”

The stars shine on the X that marks the spot. And it’s off to Planet Mickey to find the treasure!

Uh-oh. Space Pirate Pete gets to Planet Mickey first and finds the X that marks the treasure spot. Pete has one last trick. He throws out a sticky web. “Now when those little space adventurers try to pass through here and get the treasure, they’ll get stuck!” says Pete.

But it’s Quoodles who gets stuck in the web. “Poor Quoodles,” says Pete. “I gotta rescue you!” “Help!” yells Pete. “Somebody HELP!” Mickey hears him and comes right away.

But now Toodles gets stuck in the sticky web, too! “What can we do?” asks Pete. Mickey says, “I’m going to use a Mouseketool!” “That’s a great idea,” says I’ve. “And I’ll use a Quoodles tool!”

Even though he is stuck, Toodles sends Mickey a Mouseketool. It is … Space Pirate Pete! And Quoodles’ tool is … Mickey the Space Captain Mouse! “What can it mean?” asks Pete.

Everyone is happy to meet Quoodles and to see that Pete has given up his ‘piratey’ ways. Pluto points to the X. He knows where to dig. Pluto digs up the treasure chest. Inside is Professor Von Drake’s remote control. Minnie says, “Push the button, Mickey!”

The ground shakes and up comes the Mickey Mouse Space House! What a terrific treasure! Martian Mickey says, “Now when you visit us, you’ll have a fun place to play.”

As Mickey and the gang head back to their Clubhouse on Earth, Martian Mickey waves. “Thanks for stopping by”

Read Next Story The Little Mermaid

I hope your children very much love Space Adventure With Mickey Story. This story makes your children’s night beautiful and moral full. If your children want to read more stories then please check our website Amazing Story Home Page. We write cool stories for your kids. 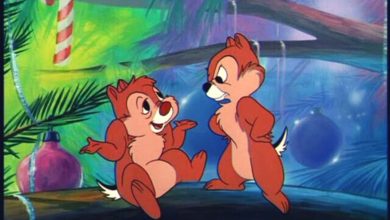