Cinderella is a beautiful Disney princess story. This is a very interesting and popular bedtime story. This is the story of one beautiful girl and their little friends. Read the full story to know more about How cinderella’s creature friend fixes her dress for Dancing with one beautiful Prince.

One day, Gus, Jaq, and the other mice who lived in Lady Tremaine’s château gathered around their friend Cinderella as she pulled her mother’s old dress out of a trunk.

“Isn’t it lovely?” Cinderella said. “Well, maybe it is a little old – fashioned,” she added, “but I can fix that!”

Earlier that day, the mice had watched as an invitation to a royal ball arrived. Since Cinderella’s father died, her stepmother, Lady Tremaine, forced her to do all the housework. But her stepmother had promised that Cinderella could go to the ball if she finished her chores and found something presentable to wear. Her mother’s old dress needed a few alterations, which wouldn’t be difficult if Cinderella could find the time to do them.

“Cinderellllaa!” Her stepmother and stepsisters called. They were getting ready for the ball and wouldn’t give Cinderella a moment’s peace. Plus, she still had to do all of her chores.

“1 guess my dress will just have to wait.” She sighed sadly.

After she left the attic, Jaq said, “Know what? Cinderelly does not go to the ball.

“The other mice looked at him, startled. Cinderella’s bird friends, who were perched on attic windowsill, twittered anxiously”

Work, work, work! “he explained with disgust. She’ll never get her dress done.”

Cinderella’s animal friends decided to surprise her by fixing the dress. After all, she had been caring for them for years. Just that day, she had rescued poor Gus from a mousetrap Then she had given him a new shirt and led bim. Egy she made sure her mouse and bird friends got enough to eat.

The mice and birds worked together to make Cinderella’s dress the most beautiful at the ball. First, they measured the gown’s skirt. Jaq and Gus used scissors to cut a long swatch of pink fabric. Flying through the air, the birds draped the fabric across the back of the dress. More birds hoisted the mice into the air so they could sew the fabric into place.

Then the mice hefted sewing needles over their shoulders and stitched on pretty ruffles. The birds draped on shiny ribbons. As a finishing touch, Gus and Jaq found a sash and a string of beads that the stepsisters had thrown away.

The birds and mice completed the dress just as the carriages arrived to take Lady Tremaine and her two daughters to the ball.

Sure she wouldn’t be able to attend. Cinderella sadly climbed the stairs to her attic room. But when she opened the door, her animal friends called out, “Surprise!”

“Oh, thank you so much!” exclaimed Cinderella. The birds and mice were overjoyed to see their friend so happy. She was always working so hard.

when Cinderella ran downstairs in her new dress, her stepsisters and stepmother were very surprised. They hadn’t thought Cinderella would find anything to wear.

“We did make a bargain, didn’t we, Cinderella?” Said her stepmother.

Suddenly suspicious, Jaq and Gus watched from a mouse hole in the wall.

“Those beads give it just the right touch, don’t you think, Drizella?” Cinderella’s stepmother asked.

“Why, you little thief cried Drizella. She lunged and ripped the beads off Cinderella’s neck.

The girls tore Cinderella’s lovely dress to shreds and then flounced out the door to their carriage. Cinderella, her hopes dashed, ran to the garden, crying.

Cinderella’s animal friends gathered around her as she wept on a stone bench. They wished they could comfort her.

Suddenly, Cinderella heard an unfamiliar voice say, “There, there. Dry your tears.

It was Cinderella’s fairy godmother! Waving her magic wand, the Fairy Godmother turned a pumpkin into a magnificent couch.

Cinderella stared in amazement as the Fairy Godmother continued to work her magic. “Bibbidi – Bobbidi – Bool” she cried. Soon, four of the mice, including Gus und Ja, had turned into white horses. Bruno the dog became the footman, and the stable horse became the coachman.

Then the Fairy Godmother looked at Cinderella’s torn dress. “Good heavens, child!” She exclaimed. “You can’t go to the ball in that!” She waved her wand once more. Suddenly, Cinderella was wearing beautiful glass slippers and a blue ball gown that shimmered like diamonds. Even her hair was arranged elegantly. She gazed at her reflection in the fountain with disbelief.

“It’s more than I ever hoped for!” She declared, sparkling her eyes sparking.

The Fairy Godmother helped Cinderella climb into the coach.

“You must understand, my dear, on the stroke of twelve the spell will be broken.”

When she arrived at the palace, Cinderella felt as though she were in a dream world. Everyone wondered who this mysterious girl was.

The handsome young prince bowed before her, and Cinderella felt her heart pounding. Later, he swept her into his arms, and they danced together in the castle garden.

Gazing into her eyes, the Prince leaned down to kiss her just as the clock struck twelve. When she heard the bell toll, Cinderella remembered the Fairy Godmother’s warning. She raced down the grand staircase, accidentally leaving one of her dainty glass slippers behind.

The next day, Cinderella went about her chores. She daydreamed and hummed a waltz as she worked. Cinderella’s mouse friends tried to warn her to be careful, but she was too busy thinking of the Prince.

Lady Tremaine overheard Cinderella and recognized the song from the ball. She realized that Cinderella was the girl from the ball who’d danced with the Prince all evening. Her stepmother locked her in her attic room.

“No! Please let me out!” Cried Cinderella.

“We’ve got to get that key.” “Jaq told Gus. The two mice raced downstairs and quietly took the key out of the stepmother’s pocket. Then they pushed and pulled it up the long staircase. With a last burst of energy, Cinderellas exhausted little friends who were finally able to slip the key. under her locked door.

Cinderella hurried down the steps. The Grand Duke had arrived while she was locked in the attic. He was searching for the Prince’s mysterious love by trying the glass slipper on every maiden in the kingdom, including Cinderella’s stepsisters.

“Wait, please wait!” She called to the Grand Duke.

At the sound of Cinderella’s voice, everyone looked up. The mice hugged each other hopefully. But Cinderella’s stepmother was upset that her stepchild had escaped, and she tripped the Grand Duke with her walking stick. The slipper Cinderella had left behind at the ball shattered!

Luckily, Cinderella still had the other slipper. She pulled it out of her pocket, then tried it on.

The slipper’s perfect fit proved that Cinderella was the beautiful young woman who had won the Prince’s heart. The Prince asked for Cinderella’s hand in marriage, and the very next day they had their wedding at the palace.

Gus, Jaq, and the other mice were thrilled that Cinderella had found her true love. Cinderella insisted that her loyal animal friends move to the palace with her. They gladly left Lady Tremaine’s château behind and began a new life as royal mice. 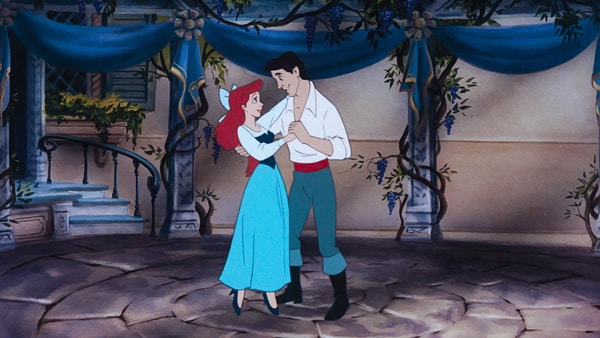