A long time ago, in a land far away, there lived a king whose wife died, leaving him with 11 little sons. And a baby daughter Elise. The king married again and the children’s new stepmother was cruel and jealous. She seemed to put the king under a wicked spell, which made him forget all about his beloved children. So the queen sent little Elise away from the palace to be brought up by a peasant couple who lived in the forest. Then she used witchcraft to turn the princes into the wild swans and she sent them flying off from the palace forever.

Many years passed and Elise thought she would never see her brothers again. Then one evening, as she was sitting by a lake watching the sunset. She saw a line of swans come flying like a white ribbon across the sky. They alighted next to her and at the exact moment when the sun melted into the lake, the swans disappeared in a flutter of feathers. In their place stood 11 princes They were Flise’s long-lost brothers! They recognized each other at once and they ran to hug each other, weeping tears of joy.

“We have to live as the wild swans by day,” the princes explained, ” but at night we return to our true selves. Our wicked stepmother banished us to live in a country that lies across a wide sea. We are only allowed to return here once a year for just 11 days. Tomorrow is the day that we must leave once again. Little sister, it is a dangerous journey, but now we have found you, we will take you with us.”

All night long, the princes gathered willow bark and tough reeds and rushes, and Elise wove them into a strong net. By sunrise, as the princes fluttered back into swans, Elise was lying in the woven mesh, fast asleep. The swans seized the net strings and, with a few powerful wingbeats, sped off into the sky. And so the brothers carried their sister right across the land and over the churning sea.

High above the waves, Elise dreamed she saw a beautiful fairy who smiled sadly and said, ” If you are very brave, you can set your brothers free from their enchantment. You must go to the churchyard and pick the stinging nettles that grow on the graves there. They will burn and blister your skin, but you must pick them with your bare hands and then crush them with your bare feet. Twine the nettles into flax and weave 11 shirts with long sleeves. The second that you throw the shirts over your brothers, they will be swans no longer. But mark this well, from the moment you start your task, you must not speak. If you utter a single word, it will be like a dagger through your brothers’ hearts and they will surely die.”

Elise awoke with a start to find herself lying on a bed of moss in a great cavern, shaded with vines and creepers. Her brothers had Flown and strangely, there was a stinging nettle lying next to her. At once, she slipped away to find the churchyard. The graves were silent and spooky, but Elise clambered all over them collecting the nettles that sprang there in thick clumps. How the nettles burned and blistered her hands! Elise hurried back to the cave and trampled on the nettles until they were crushed and her feet swollen and sore. Finally, she twisted the stalks into flax and began carefully to weave…

Elise’s work was clumsy and slow due to her red, painful hands and arms. But by the evening when the wild swans returned, she had woven nearly half of the first shirt. The princes were upset by Elise’s strange task and scared by her silence. But when they saw the spark of hope in Elise’s eyes, they realized that she must be suffering for their sake. The youngest brother wept for his sister’s pain. and as his tears fell onto her injured arms and hands, the blisters healed themselves and disappeared. Elise would have worked around the clock until all eleven shirts were finished and the spell was finally broken. However, the next day, her hiding place in the cavern was sniffed out by a hunting dog. And a royal hunting party burst in upon her.

Elise was terrified, but she knew that if she uttered a single word, her brothers would die. The king thought that Elise was the most beautiful girl he had ever seen. “Don’t be afraid,” he said gently to her, as she stood trembling and silent. “Whoever you are, you can’t live here in this cave. You will come back to my palace and I will make sure you are looked after and taken care of.” The king lifted Elise up behind him on his horse and they were off like the wind over the hills.

Elise wept without a word as the ladies of the court dressed her in silks and satins, threaded pearls in her hair, and led her into a splendid banquet, which the king had ordered in her honor. You will be my queen ” the king told Elise gently after the feast, but I do not want you to be sad. I want you to be happy here with me. ” The king led Elise down a corridor to a small door. He opened it and Elise’s mouth widened into a perfect ” O ” of surprise. The room was adorned with green hangings to look just like the cave in the forest. And on the floor was the shirt she had finished and all the bundles of nettles from the churchyard. Elise Flung her arms around the king and kissed his face and hands as he handed her the key to the little room.

After that, Elise spent every day at the king’s side. She could see that he was good and kind and thoughtful, and she longed to tell him how much she had begun to care for him but she dared not utter a sound. Every night, Elise crept down the corridor in her nightdress to her secret little room and continued with her weaving. Her heart was heavy with the thought that her brothers did not know where she was and must be searching anxiously for her.

Night after night, the pile of flax grew lower and lower. And by the time the tenth shirt was finished, Elise was in desperate need of more nettles. There was nothing for it but to creep out of the palace by moonlight and hurry down the dark paths all the way to the churchyard. When Elise reached the graves, her blood ran cold with horror. Witches sat on the tombstones, reaching down into the earth with their bony fingers. Elise thought of her brothers and forced herself to walk past the witches and collect huge armfuls of the burning nettles. Then she was away, hurrying back to the palace before dawn…

Unbeknown to Elise, the king’s chief advisor had spied on her. He had always been jealous of the wild, silent girl from the cave who had won the king’s heart and now sat at the king’s side instead of him. His wicked heart leaped for joy as he hurried to the king the very next morning. “Your majesty,” the chief advisor whispered, “I am sorry to tell you that I saw your bride be at the churchyard last night, surrounded by witches. She can only have been performing black magic.”

The king shook his head vigorously. You must be mistaken, he said. “I do not believe it.”

“Go to Elise’s room and see the new pile of churchyard nettles she collected for her spells,” the chief advisor insisted. “She is a witch and she must be burned. The people will find out and they will demand it.”

The king hung his head in sorrow. He felt as though his heart was breaking.

The next morning, guards broke into Elise’s chamber and hauled her away to a dark, damp prison. They left her with only her nettles for a pillow. And the shirts she had woven to keep her warm, but they were all Elise wanted. Elise didn’t know what she had done wrong. But she knew she was going to die and that she didn’t have much time left. Her hands trembled as she hurried desperately to finish the final shirt As she twisted and plaited and wove, a swan came flapping his wings against the window. Elise recognized her youngest brother. And she ran to thrust her fingers through the bars and stroke his feathers She couldn’t say a word to tell him what had happened. And tears sparkled in her eyes as she waved him away and hurried back to her work.

All day and all night, Elise’s sore fingers worked faster than ever. As the sun’s rays stretched through the bars, the final shirt was nearly, nearly finished Elise didn’t stop frantically working even when the guards thrust her into a smelly cart and they went bumping through the streets. Crowds of people threw mud at her and jeered Look at the witch !” they shouted. “See, she’s working on some evil spell!”

Then the cart arrived at the bonfire and the executioner stepped forward to drag Elise to her death. But suddenly, 11 huge, white swans swooped down out of the sky. Quick as a flash, Elise grabbed the shirts and threw them over the birds.

The crowd fell back in terror as there was a huge flash of lightning. The swans disappeared and in their places stood 11 handsome princes although the youngest had a swan’s wing instead of one arm, for Elise had run out of time to finish the final sleeve of his shirt.

“Now I can speak!” Elise sobbed. I am innocent! “She sank into her brother’s arms and the princes explained all that had happened.” Then the people began to cheer and the church bells rang out for joy. And the king took his beautiful bride and her brothers back home to his palace.

I hope your love The wild Swans Story. Really, this is a very interesting bedtime story for little kids. If your children want to read more stories then please check our Home Page. We write the best stories for your kids. Stories make your children’s night beautiful with full of Fun. 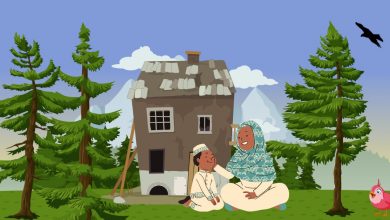 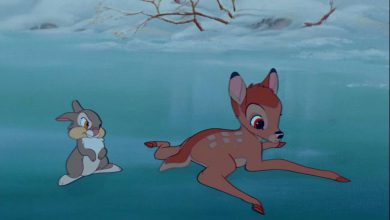 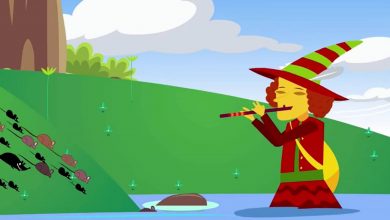 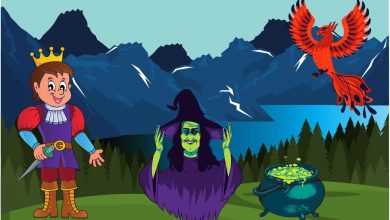