Frank could count by twos and tie his shoes.  He knew the days of the week, the months of the year, and the holidays in every season.  Today was October 31. It was Halloween!  Frank could hardly wait for tonight’s costume party.  Everyone would be there.

Frank and his creature friends had talked about the party for weeks.  There would be games, prizes, and even a parade.  Best of all, there would be a haunted house.

Rabbit shivered,  “My sister says she saw a real ghost in there last year.”

All of Frank’s friends were excited because of the costume contest.

Turtle Frank wasn’t sure what he was going to wear.  He’d tried on everything in his dress-up trunk, but nothing seemed quite right.

Beaver and Goose were keeping their costumes secret.

Beaver and Goose giggled, “Try to find us at the party.”

Fox was also mysterious about what he was going to be.  he said, ” Look for something gruesome,” Which gave Frank an idea.  He would be something creepy.

It took Frank more than an hour to make his costume.  As soon as it was done, he sneaked up behind his father and tapped him on the shoulder.

His father gasped,  “Who are you?”

In his deepest, spookiest voice, Frank answered, “It’s me. Franklinstein!”

On the way to town, Frank tried to guess who was inside each costume.

Frank said, “At least I don’t have to worry about finding Bear.” ” He’s always a ghost.”

By the time Frank and his parents arrived, the party had started.  Frank spotted a ghost at the apple – bobbing and hurried towards him.

Frank bobbed for an apple.  Then he ran to the pumpkin toss.  It was his favorite game because he always won a treat.

Frank’s bag was almost full by the time the judges announced the costume contest.  While everyone lined up for the parade, Frank tried to find more of his friends.  He thought he recognized Beaver and Goose.  But where was Fox?

They marched around the building twice.  Frank made horrible monster sounds and shuffled with stiff, straight legs.  He won a prize for being the best green monster.

There was only one more thing to do – go into the haunted house.

Beaver, pushing Frank towards the door said,  “You first”

It creaked open.  A skeleton rattled.  Chains clanged.  There were moans.  Frank stepped on something crunchy.

Suddenly, a big hairy hand reached out of the darkness.  Frank’s heart beat hard and fast. Dhaaak dhaaak….!  But before he could scream, a light was flicked on.

Frank looked around nervously.  Then he laughed.  The hairy hand was only Mr.  Mole’s mop.

Mr. Mole said, ” Here’s a treat for braving the haunted house.”  “A ghost came before you. He got so scared he flew away.”

Frank shuddered, “Bear is home sick with a nasty cold.”  “If Bear wasn’t the ghost, then who was?” He ran back to his friends, who were waiting in line for the haunted house.

Fox asked, “Was it that scary?” “You look like you’ve seen a ghost.”

He told them what Mr. Mole had said.

Beaver asked, “You mean that Bear was never here?”

Frank shook his head. The ghost flew over them. It swooped low and called, “Whooo!”

The rabbit twitched, “So what is white, says Whooo and flies?”

Frank was about to follow when he saw a feather floating down.  he shouted, “Stop!”  “I think I know whooo the ghost is.”

Frank showed them the feather. “Look.  It must be Mr.  Owl.” Even Rabbit giggled when he realized the trick his teacher had played.

By the end of the party, everyone’s bag was full.

Raccoon said, “Poor Bear.” “No treats for him.”

Frank suggested, “We could share our treats with Bear.”

All the friends agreed.  They each put some treats into a bag.  Then they walked to Bear’s house and left the bag on the doorstep.

They called, “Trick and threepeat!”

I hope your kids very much love this story. If your children want to listen to more stories then check out our website home Page Amazing Story. We write very wonderful stories for your little kids. Stories make your children’s day beautiful with full of Funs and Moral. 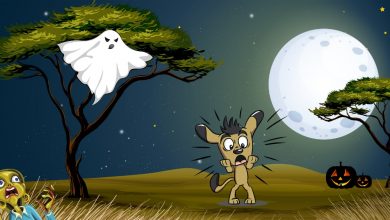 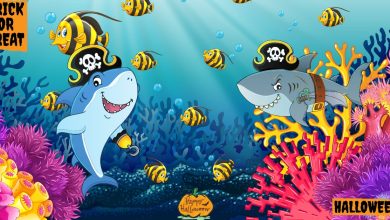